Shichijugozensue Ritual is an event to dedicate food to the kami (gods or deities) at the grand rites held at our shrine in spring and autumn and used to be a grand feast held in the 9th lunar month. It was a festival to thank the kami by dedicating yields from the villages in Bitchu Province such as new grains to our shrine, the only shrine in the province. Especially in the Edo period (1603-1868), it was extremely popular, with some entertainment such as kabuki plays which were carried out for over a month. During the Meiji era (1868-1912), it was held on the 13th of May and the 19th of October, in spring and autumn respectively. Since 1971, it has been held on the 2nd Sunday of May and October due to the large number of people required.

Nowadays, more than 10 people to take care of the event gather in a building called Gokuden Hall at the end of the 300m long corridor, and prepare 75 sets of food as well as other food, treasures, and offerings to dedicate to the kami by the day before the event. The tableware to dedicate those things to the kami varies in shape, such as a tray with legs, a flat tray, a tray or dish with a long leg, and a kind of jar, but is all magnificent, lacquered in black. Each set has steamed white rice served in a cylindrical shape at the center in spring and brown rice served in the same way in autumn, with sea bream and seasonal delicacies from the sea and mountains served at the four corners and willow chopsticks on the side.

The procession consists of pairs of servants holding the trays with 4 legs from both sides, and other servants solely holding the flat trays and others, all wearing the upper garments which have been worn for Shinto rituals since ancient times. Over 100 people in a long procession solemnly walk down the corridor from Gokuden Hall to Minamizuijinmon Gate while being watched by many spectators. When arriving at the gate, they stop for a while, and the chief priest recites ritual prayer to the kami of the gate. When the procession arrives in front of the Main Sanctuary, those standing by receive the food and other offerings brought by the procession and forward them to the priests inside the Main Sanctuary, who later place them in certain positions. On this day, even the spacious inside of the Main Sanctuary is filled entirely with food and offerings.

After completing the offerings, the chief priest performs a ritual prayer. After that, when the attendees move to the venue for a feast after dedicating sprigs of the sacred tree to the altar, the ceremony concludes. This is a solemn ceremony that begins around 11 a.m. and ends around 1 p.m. at the Main Sanctuary. 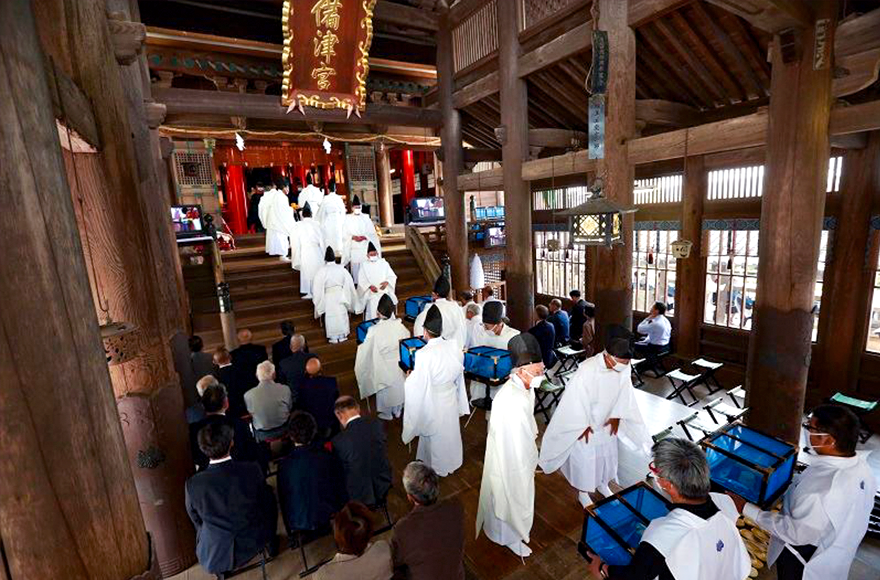 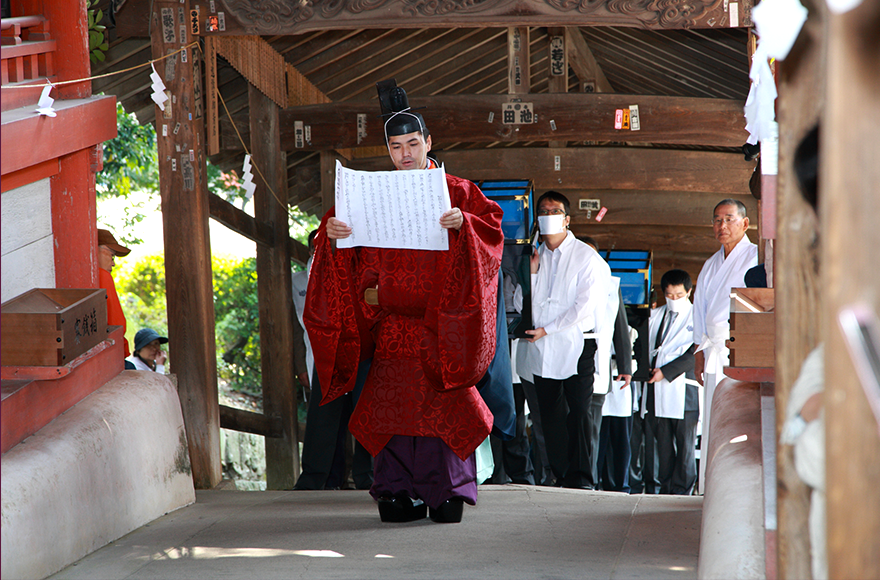 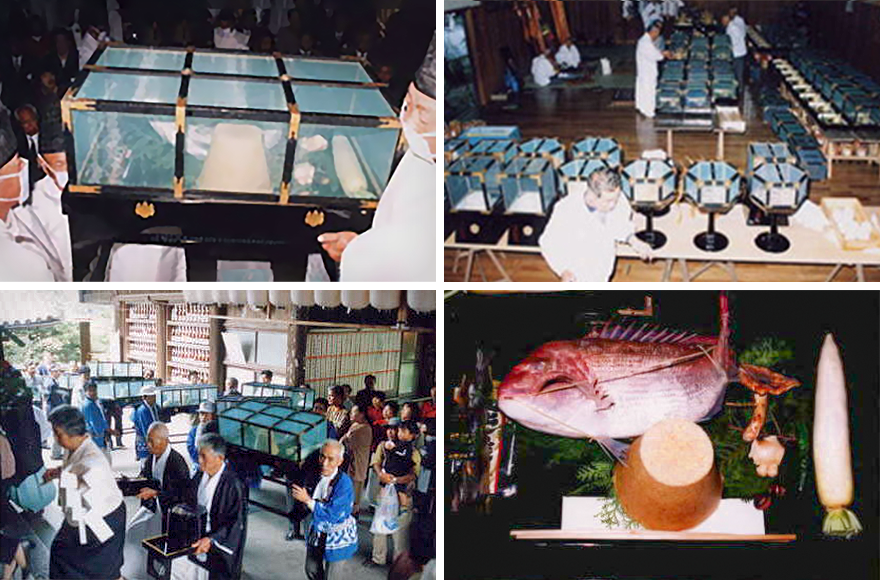 When focusing on the number of food sets to be offered, you may wonder why it is 75. One legend says that it is because 75 was an auspicious number next to 81, the most auspicious number in ancient times. Another legend says that it is because our shrine has 75 places for the kami to rest. It is also said that there were 75 villages that each offered 1 set of food. Considering the fact that this ritual is believed to have taken into account the triumphant return of the kami after he had defeated Ura, the number of villages seems to be the most likely reason.