The Main Sanctuary is about 14.6m long, 17.7m wide, 12m high (from the bottom of the foundation to the top of the roof), and 255m² in floor area. It is the second biggest building in Japan, after that of Yasakajinja Shrine in Kyoto, and more than double the area of Izumo Oyashiro Shrine.

It is a single-storied shrine hall standing on a bun-shaped foundation covered with white plaster, facing north. The pillars which constitute the framework of the building are cylinder-shaped, about 48cm in diameter and made of 68 pieces of 6m wood called asunarou used both inside and outside. It is an extremely challenging structure to build with the two East Asian hip-and-gable roofs which are lined up front and back, connected with the ridge of the same height and entirely thatched with cypress bark to form one large roof. When viewed from above, the ridge of the roof looks like the letter "H". According to architectural studies, it is called "Hiyoku Irimoya Zukuri (the winged East Asian hip-and-gable roof)" and is the only one of its kind in Japan, so it is also called "Kibitsu Zukuri".

The extremely deep eaves and porch of the Main Sanctuary, which have no supporting pillars and only have exposed rafters, are made of wooden assemblies called sashihijiki of daibustuyo, a Japanese religious architectural style which was brought from the continent by the monk Chogen, who was devoted to the reconstruction of Todaiji Temple, creating architectural beauty that is truly well-balanced.

The inside of the Main Sanctuary is divided into the outer sanctuary, the vermilion platform, the central sanctuary, the inner sanctuary, and the innermost sanctuary. The floors and ceilings become higher toward the center. The patterns of each ceiling are different. The front part of the central sanctuary and the vermilion platform has a coffered ceiling.
The most inner sanctuary has a ceiling shaped like the bottom of a boat. It is also beautifully painted with vermilion, red earth, and gofun (a white pigment made from shells). The exterior is currently unpainted natural wood, but it is believed to have been initially painted with red earth. 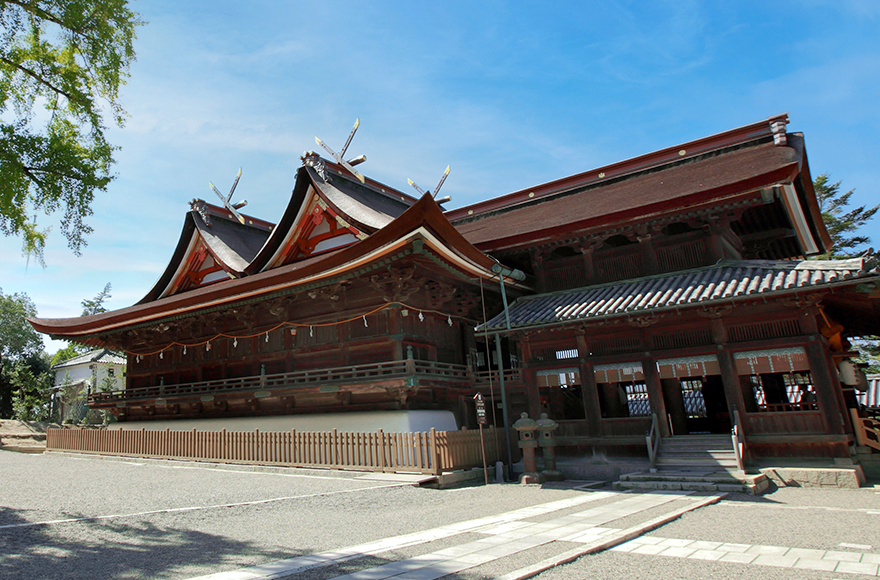 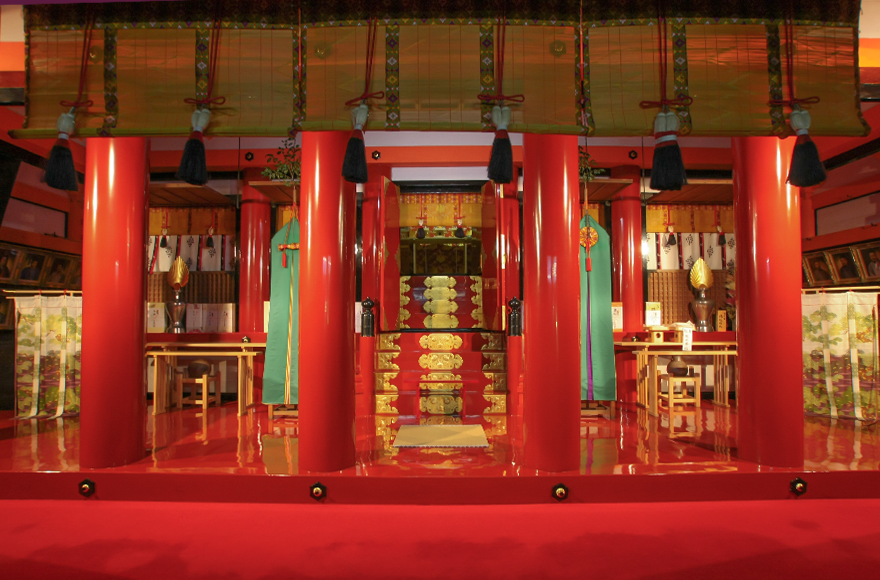 The Worship Hall is a building stretching forward from the front side of the Main Sanctuary, where it is connected to the Main Sanctuary, and was rebuilt at the same time as the Main Sanctuary.
The space between its pillars is about 8.2m in front and 9.8m on the sides. Its height is about 12m, and its floor area is about 78.5m². It has columns as thick as those used in Main Sanctuary and also daibustuyo assemblies made of sashihijiki. The structure is multi-storied on the exterior and an atrium in the interior that allows views to the attic. The front of the hall is gabled and thatched with cypress bark. On the front and both sides of the hall, there are about 1.8m deep skirt roofs which are tiled in the style called Honmaru. The Hall features a distinctive design that cannot be found anywhere else in Japan.

During the relocation of the shrine in 1910, only the Worship Hall was renovated and some of the pillars were replaced.